NEDO and Hitachi, Ltd., have been working since November 2016 on the construction of a cloud-based integrated distribution management system (DMS) for small and medium-sized electricity distribution companies in a demonstration project carried out with ELES, d.o.o., Slovenia’s state-owned electricity transmission system operator. Following completion of the DMS installation, test operation will begin at the end of May 2018 and the DMS demonstration will start at the end of July 2018.

For the demonstration, a cost-reduced cloud-based DMS will be delivered to two Slovenian distribution companies. The DMS has advanced functions, such as the ability to maintain appropriate voltages and shorten the length of power outages. Furthermore, the project aims to establish a business model for small and medium-sized distribution companies by verifying and utilizing functions that will help resolve issues in Slovenia and other EU countries facing similar situations. 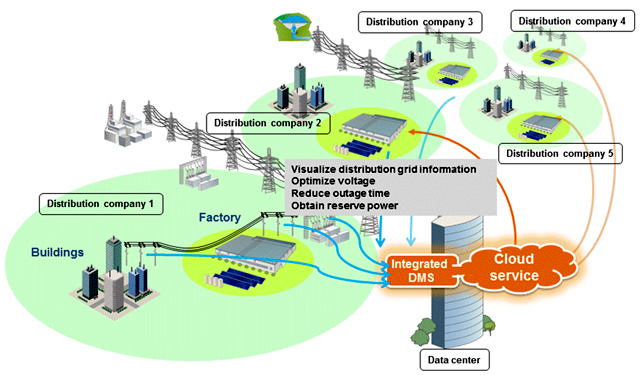 As part of its national energy policy, Slovenia has set targets to cover 25% of its total energy consumption requirements by 2020 through the use of renewable energy sources and to also improve its energy efficiency by 20%. In addition, Slovenia has ratified the Paris Agreement, the international framework for measures against global warming which came into effect on November 4, 2016. Since joining the EU in 2004, Slovenia has enjoyed improved standards of living and the highest manufacturing industry growth rate in the EU region, which is resulting in increased demand for electricity. However, the infrastructure of Slovenian power distribution companies has deteriorated over time, and the cost of replacing the existing infrastructure is expected to increase. For these reasons, more sophisticated and economical distribution management technologies are required to resolve issues associated with voltage fluctuations, power outages, power overloads, the acquisition of reserve power, and other problems expected to occur as demand for renewable energy and electricity increases in the future.

In this context, on November 25, 2016, NEDO signed two documents for embarking on a smart community demonstration project in Slovenia: a memorandum of cooperation with the Slovenian Ministry of Economic Development and Technology, and a minutes of meeting with the Slovenian Ministry of Infrastructure. In addition, NEDO reached agreement on the joint implementation of a demonstration project*1 and signed a memorandum of understanding with ELES, Slovenia`s state-owned electric transmission system operator. NEDO selected Hitachi and Mizuho Bank, Ltd., as its entrusted parties and then officially began the project, which is scheduled to end in December 2019.

NEDO and Hitachi, in cooperation with project partners, have been working since November 2016 on the construction of a cloud-based integrated DMS for small and medium-sized electricity distribution companies. Following completion of the DMS installation, test operation will begin at the end of May 2018 and the DMS demonstration will start at the end of July 2018.

During the demonstration, the cloud-based DMS should save initial investment and maintenance costs. A DMS with functions to maintain appropriate voltage levels and shorten the length of power outages will be deployed at two Slovenian distribution companies. The project also aims to establish a business model for small and medium-sized electricity distribution companies by verifying and utilizing functions that will help resolve issues in Slovenia and other EU countries facing similar situations. Specifically, a cloud-based integrated DMS system which can be utilized among several distribution companies will be developed by adopting a virtual architecture, and servers will be aggregated and installed at a data center located in Stelkom, a suburb of Ljubljana, Slovenia. In addition to basic functions, the integrated DMS includes advanced functions such as a voltage and volt-ampere reactive optimization*² function to mitigate voltage deviations which are an impediment to the introduction of large amounts of renewable energy, a fault monitoring function that enables distribution systems to minimize the length of power outages, and a demand response*³ function to reduce or delay the need for investment in the distribution network. Moreover, the distribution network is equipped with additional reclosers, ring main units*⁴, transformers with on-load tap changers*⁵, and measurement equipment to enable the integrated DMS to monitor and control the targeted distribution network.

Moving forward, Hitachi and ELES will investigate the possibility of developing a business model that, based on an analysis and assessment of this demonstration project, will offer the cloud-based DMS as a service in other regions.

2．Ceremony to celebrate start of operations

Before testing begins, a ceremony to celebrate the start of operation was held on May 8, 2018, in Ljubljana. Many stakeholders such as His Excellency Dr. Miro Cerar, Prime Minister of the Republic of Slovenia; His Excellency Mr. Keiji Fukuda, Ambassador Extraordinary and Plenipotentiary of Japan to the Republic of Slovenia; Mr. Takashi Omote, Executive Director of NEDO; and representatives of other involved parties attended the ceremony.