Three cold-resistant wind turbine generators have started operations for a NEDO demonstration project taking place in Tiksi City, a municipality with an islanding electric grid located north of the Arctic Circle in the Sakha Republic of Russia.

In the next phase of the project, a polar microgrid system will be developed that includes an energy management system that will collectively manage the electricity provided by the newly-installed wind turbines, existing diesel generators, and storage batteries. In pursuit of the project’s goal of providing stable energy supplies to this region, a demonstration of the system’s technologies will begin by the end of 2019. 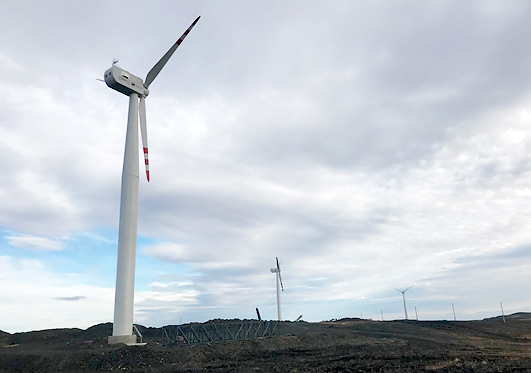 In the Russian Far East, many areas are not connected to large-scale power grids and therefore maintain small-scale islanding electric grids that rely on diesel generators for power supplies. In these areas, the cost of electricity is very expensive because of high fuel transport costs. Regional governments of the Russian Federation have also taken policy measures to keep electricity rates at levels similar to those found in grid-connected areas. These measures are a substantial financial burden on governments in this region. In addition, the diesel generators currently being used are old and deteriorating, posing a risk to the stable supply of energy in the region.

Prior to a demonstration of an energy management system scheduled to start by the end of 2019, three cold-resistant wind turbine generators with a capacity of 300 kW have been installed. These turbines are equipped with operational control programs designed to function in temperatures below minus 30 degrees Celsius.

By the summer of 2019, the development of a polar microgrid system is scheduled to be completed which includes an energy management system that collectively controls electricity provided by the newly-installed wind turbines, the existing diesel generators, and storage batteries. By the end of 2019, a full-scale demonstration is scheduled to start that will verify the system’s ability to provide low-cost and stable energy supplies to frigid regions. In the upcoming demonstration, efficient operation of the wind turbines and diesel generators is expected to reduce consumption of diesel fuel by about 16% annually.

This project corresponds to the theme of cooperating in petroleum, gas and other energy development and enhancing production capacity included in the eight-point bilateral cooperation plan agreed to at the Japan-Russia Summit Meeting in May 2016. On November 7, 2018, NEDO organized a ceremony in Yakutsk, capital of the Sakha Republic, to mark the start of wind turbine generator operations.