In this demonstration, Toshiba ESS will implement an anomaly predictive diagnostics technology using big data analysis which Toshiba ESS has developed since 2018 under NEDO’s grant, on an actual power generation equipment in Indonesia in order to review the technology’s ability to predict anomalies ahead of time, while validating the effectiveness of this technology. Indonesia is a country that is actively utilizing geothermal resources for power generation.

Through this demonstration, Toshiba ESS aims to lower the rate of problem occurrences at geothermal power plants by 20% and reduce unplanned outage period in power stations. Increasing utilization factor leads to an increase of power generation amount and a reduction of the generation cost. It can be expected that the project will contribute to higher adoption of geothermal energy. 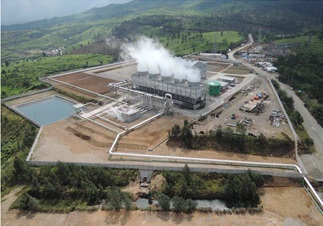 The 5th Strategic Energy Plan, approved by the Japanese Cabinet in July 2018, presents the basic direction of Japan’s energy policy towards 2030, and further towards 2050 including the path to decarbonization. The plan emphasizes the strengthening of efforts to achieve an optimal energy mix and a low cost renewable energy that is identified to be the primary energy source towards 2030. Japan, as a country with the third largest geothermal resource potential in the world, is expecting geothermal power generation to function as base load energy source*2 since this renewable resource can provide stable power output. The installed capacity of geothermal power generation in Japan is targeted to reach 1,550 MW by 2030.

Toshiba ESS will install an anomaly predictive diagnostics system using big data analysis in PT Geo Dipa Energi (Persero) (GDE)’s Patuha Geothermal Power Plant and examine the plant operation data on a real-time basis. This predictive diagnostics technology analyzes the power plant’s past and daily operating data through various sensors with big data analytics and predicts anomalies for the equipment ahead of time, detecting potential problems during normal operations. The results of the analysis are consequently shared with GDE’s Headquarters and Toshiba ESS engineering sites through information and communication technology (ICT) for review, which allows Toshiba ESS to verify the technology as a whole system.