The New Energy and Industrial Technology Development Organization (“NEDO”) and Sumitomo Electric Industries, Ltd. have installed a redox flow battery (RFB)*1 system for a demonstration project to improve the power quality of the transmission and distribution network in the U.S. state of California. NEDO has decided to extend the project to conduct an additional demonstration of a microgrid, in which a part of the distribution line, including residential customers, will be isolated under the operation of the RFB system. The project is scheduled to run until December 2021. It aims to demonstrate not only the technical features that strengthen resilience, but also the commercial value of the RFB system as a power source for a microgrid in emergency situations as well as for market participation in normal times. Grid resilience is increasingly important as California grapples with more frequent Public Safety Power Shutoffs (a tool implemented statewide to reduce wildfire risk) and also reliability concerns during peak summer periods. California experienced its first rotating outages in 20 years during the summer of 2020. 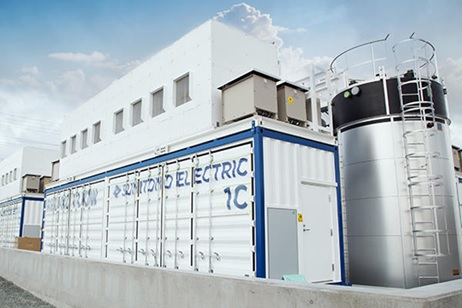 In California, U.S.A., the government has passed Senate Bill No.100 declaring an ambitious policy stating that renewable energy and zero-carbon resources will supply 100% of electricity consumed by California’s end-use customers and state agencies by 2045. The government has also been promoting the introduction of energy storage facilities as a solution to the problem of power quality deterioration caused by the mass adoption of renewable energy.

In September 2015, NEDO concluded a memorandum of understanding with the California Governor's Office of Business and Economic Development (GO-Biz). Under this agreement, the demonstration project*2 has been conducted in San Diego, California in cooperation with Sumitomo Electric Industries, Ltd. and San Diego Gas & Electric Company, a major power utility company.

In California, planned power outages have been implemented as measures to prevent disasters such as major wildfires(Public Safety Power Shutoff) in recent years and rotating power outages were conducted to lessen energy demand during extreme heatwaves, which are becoming a social problem. In the past, certain customers with critical loads such as data centers have implemented protections against power outages, but there is an additional need for countermeasures against widespread power outage and for strengthening the resilience of power grids. One solution is a microgrid with energy storage systems that power isolated distribution lines.

As part of the planned microgrid demonstration*3, in order to analyze any technical issues, part of the distribution network which the RFB system with an energy capacity of 8 MWh and approximately 70 consumers are connected will be isolated from the grid. The RFB system has been participating in the California Independent System Operator (CAISO) market since December 2018. Redox flow batteries have the advantages of charging and discharging patterns and the number of cycles not causing degradation, and real time measuring of the remaining charge. This allows flexible bidding patterns without operational constraints in the markets which has led to innovative bidding strategies to improve revenue in both the energy and ancillary services*4 markets being developed and successfully demonstrated. The project aims to demonstrate the commercial value of the RFB system in which the power utility company can generate revenue from the CAISO markets during normal times in addition to providing back up power from the microgrid to customers in emergency situations.

This “dual-use” capability will become the world’s first demonstration of its kind, and we hope to contribute to the greater market penetration of energy storage based on the innovative achievements of the project.

NEDO and Sumitomo joined GO-Biz and SDG&E to issue an additional joint press release which can be accessed at:

We will develop the system by fall 2021, when wildfires are common, and conduct the microgrid demonstration until December 2021. RFB technology is not only applicable in the U.S. but also in isolated microgrids with solar and wind power facilities and in 100% renewable islands all over the world. After the project, we will apply the technology to these fields, promote the introduction of energy storage, and contribute to the expansion of renewable energy and the reduction of greenhouse gas emissions as well as the strengthening of power grid resilience.

*1 Redox flow battery (RFB) System
An RFB system consists of cells for battery reaction, tanks for storing active material, pumps, and pipes for circulating the active material. In RFB systems, the output (kW) and capacity (kWh) parts are independent of each other, allowing for appropriate output power and energy capacity design according to application. The charging and discharging reaction causes a change only in the valence of the ions in electrolytes, which prevents degradation of the electrodes and the active material, making it suitable as a long-life large storage battery. In addition, because it can operate under normal temperatures and is composed of non-combustible or flame-retardant materials, the possibility of a fire with the batteries is extremely low. As the state of charge is monitored accurately, the batteries ensure maximum safety in system operations.
*2 Project
Project title: International Demonstration Project to Prove Japanese Technology for Improved Energy Consumption Efficiency/Demonstration Project Testing Storage Battery Operation for Both Electricity Transmission and Distribution in California, USA
Project period: FY2015 to FY2021
*3 Planned microgrid demonstration
The simulation results based on the demand history show that the RFB system can power customers in the microgrid for more than 24 hours.
*4 Ancillary services
Technical and operational schemes to maintain power quality. They include power balance monitoring, operating grids, and voltage/frequency regulation. In the past, utility companies were in charge of ancillary services. But in recent years, some functions of ancillary services have been identified, monetized, and built into the markets.