NEDO and Kanematsu Corporation have been carrying out a demonstration project since 2015 to expand the range of electric vehicles (EVs) in California and are pleased to announce the launch of EV Co-Driver, a navigation app for smartphones specifically designed for EVs.

The app instantly shows users the shortest route based not only on their driving route and time but also the waiting time at a charging station and charging time. All users have to do is enter their destination and battery level. Even after departure, the app provides turn-by-turn navigation and continually searches, in real time, for the shortest route based on route changes and charging station congestion so that the vehicle does not run out of battery power. These features will reduce EV drivers’ range anxiety. This is the world's first navigation app with comprehensive features designed specifically for EV drivers and will help expand EV cruising ranges and promote the widespread use of EVs. 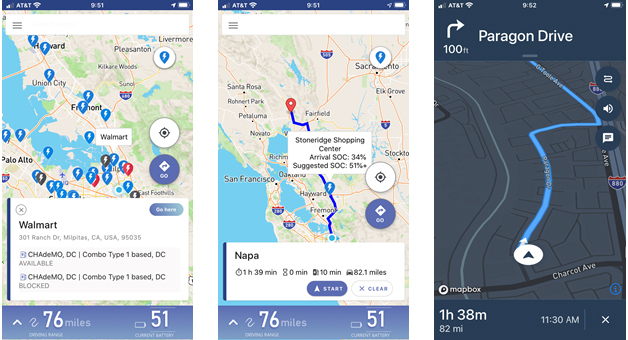 Amid growing efforts to promote electric vehicle (EV) adoption worldwide, the United States focused on EVs at an early stage of their deployment and has been making various efforts to promote their dissemination. The State of California, in particular, has set a goal of having five million zero-emission vehicles (ZEVs) on its roads by 2030, and it requires manufacturers to sell specific numbers of low-emission cars, such as EVs and plug-in hybrid vehicles, based on the scale of each manufacturer’s sales in California. The state’s ZEV regulations also allow EV drivers to access carpool lanes on highways. Due to its robust policy, California is currently the leader in private EV sales in the United States. However, EV usage is currently limited to short-distance travel because charging infrastructure is still being developed around urban areas.

Against this backdrop, NEDO, Nissan Motor Co., Ltd., and Kanematsu Corporation launched the DRIVEtheARC*3 demonstration project*4 in 2015. The project’s goal is to expand the use of EVs and extend their cruising range through expansion of an inter-city charging network and real-time information services. By installing 55 DC 50 kW fast chargers and 2 DC 100 kW high-power fast chargers at 26 charging stations along an inter-city route stretching 530 kilometers from Monterey to Lake Tahoe, the project has been analyzing EV driving and charging behavior. Following the DRIVEtheARC smartphone app being made available to EV drivers in November 2016, NEDO and Kanematsu Corporation have started offering EV Co-Driver*5, a navigation smartphone app specialized for EVs.

Introduction of these apps is expected to further enhance the demonstration project. By installing fast chargers and offering such apps, the project aims to investigate how a fast-charging network can contribute to expanding the range of EVs and also improve the accuracy of EV driving behavior data analysis. To be more specific, based on multifaceted data analysis of driving and charging behavior for EVs that have different battery capacities, the charging behavior of EV drivers using the charging reservation service will be studied to extend vehicle cruising ranges. Through these efforts, the project seeks to enhance EV driver convenience and ease congestion at charging stations in urban areas where the number of users is increasing, exploring the possibility of developing the environment for more comfortable EV drives over longer distances.

Until now, when traveling long distances or driving in unfamiliar areas, EV drivers have had to search for information on navigation routes and battery charger operation status using various apps and plan their trips in advance to avoid the risk of running out of power and reach their destinations safely. EV Co-Driver is designed to eliminate the hassle for EV drivers by displaying the location of charging stations as well as the specifications, number, and operating status of the chargers. The user only needs to enter their destination and remaining battery level. EV Co-Driver shows the shortest route by taking into account not only the driving route and time but also the waiting time at the charging station and charging time.

In addition, even after the vehicle has departed, the app searches for the shortest route in real time and navigates turn-by-turn in response to route changes and charging station congestion to avoid power shortages. This will reduce EV drivers’ range anxiety due to insufficient battery power. This is the world's first navigation app with such comprehensive functions tailored to the needs of EV drivers and will expand the range of EV trips & journeys and help promote the widespread use of EVs.

*1 API
The acronym for application programming interface
APIs enable a software program to interact with other software. By releasing the API on the Internet, services can be provided to businesses in Japan and abroad.
*2 Turn-by-turn navigation
A function that shows the route and direction to the destination by audio and video.
*3 DRIVEtheARC