First time in the U.S. and Japan to Successfully Build and Operate Microgrid with Battery Storage on Actual Power Distribution Network
– Strengthens Resilience of Power Infrastructure in California, USA –

The New Energy and Industrial Technology Development Organization (“NEDO”) and Sumitomo Electric Industries, Ltd. (“Sumitomo Electric”) have completed a demonstration project in the U.S. State of California to improve the power quality of the grid, and have successfully achieved the major deliverables such as establishment of a microgrid on a commercial power distribution network inclusive of 66 customers, operation of a large-scale stationary storage battery, the Redox Flow Battery (RF Battery), and multi-use operation in both normal and emergency situations.

The system makes it possible to earn revenue through electricity market transactions during normal operations, in addition to providing power to blackout areas or the areas that outages are assumed, as an independent power source, during an emergency such as natural disasters and planned outages. It is the first time in the U.S. and Japan that a microgrid has been operated on a commercial distribution network with the storage batteries as the main power source, bracing for a power outage.

The results of this demonstration project could be applicable to the cases with high potential demand both in Japan and abroad in the future, such as microgrids with solar and wind power facilities constructed for off-grid areas and 100% renewable energy supply is required for the islands where the transportation cost of power generator fuels is expensive. 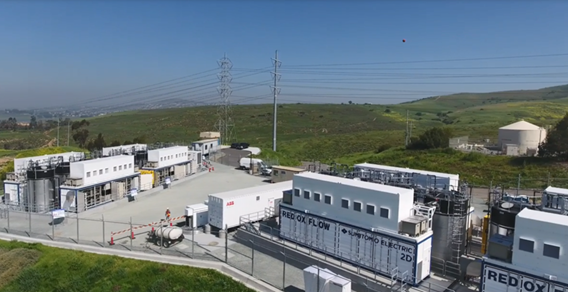 The U.S. state of California has enacted Senate Bill 100, aiming to use only clean greenhouse gas-free energy sources by 2045, and is promoting the introduction of energy storage facilities as a solution to the problem of deteriorating electricity quality due to the mass introduction of renewable energy. In addition, California has been increasingly experiencing emergency planned and rotating power outages recently as a countermeasure to wildfires and rapid increase of air conditioning load during extremely hot weather, which is becoming a social issue. Thus, in the event of a power outage, the consumers like data centers supply electric power from storage batteries only to the circuits connected to specific distribution boards (critical load distribution boards) as power outage countermeasures. But countermeasures against power outages to cover wider areas and strengthening the power system resilience are also requested.

With this background, NEDO commissioned Sumitomo Electric in September 2015 and proceeded with the demonstration project*1 in San Diego, utilizing redox flow batteries (RF batteries)*2, which are stationary storage batteries with long service life and are suitable for the large-scale use.

RF batteries have an advantage in that they do not experience degradation due to factors like charging/discharging nor by the number of cycles and makes it easier to measure the remaining energy in batteries in real time. The project has been developing bidding strategies and conducted a demonstration which could increase profits in both the energy market (electricity trading market) and the ancillary services*3 market and also made it possible to select a highly flexible bidding pattern for electricity trading that was already initiated with a local grid operator (independent system operator) in December 2018*4.

In 2021, NEDO and Sumitomo Electric decided to additionally demonstrate the operation*5 of a microgrid on the distribution network, utilizing RF battery facilities as a countermeasure against planned and rotating power outages that are becoming a problem in the state and commenced the successful operation in October. It is the first time in the U.S. and Japan that a microgrid has been operated on a commercial distribution network with storage batteries as the main power source, bracing for a power outage*6.

NEDO and Sumitomo joined GO-Biz and SDG&E to issue an additional joint press release which can be accessed at:

Microgrid with VRF battery (8MWh) has successfully provided electricity to 66 real residential customers, as stand-alone power source, through distribution network on the assumption that they are disconnected from the grid during power outages because of natural disasters etc.

Although both electricity demand and power output of solar systems in the microgrid are always fluctuating, the VRF battery could stabilize the voltage and frequency of the distribution lines by charging/discharging the power required to sustain supply-demand balance.

We have confirmed that it is possible to stably shift from a grid-connected state to a microgrid*7 in either a black-start transition which is to boot the storage batteries during a power outage, or a seamless transition in which the consumers don’t notice a power outage.

The above-mentioned demonstration results validated that we could supply power to foreseeable blackout areas as a stand-alone power source within a microgrid in times of an emergency such as planned outages and natural disasters, while earning profits through power transactions with a grid operator during normal times.

The results of the performance validation through the demonstration project are as follows:

The results of this demonstration project could be applicable to the cases with high potential demand both in Japan and abroad in the future, like when microgrids with solar and wind power facilities are constructed for off-grid areas or 100% renewable energy supply is required for the islands as the transportation cost of power generator fuels is expensive.

By disseminating the technology developed in the project, NEDO and Sumitomo Electric will contribute to enhancements of grid resiliency, and realizing the carbon neutral society by both increasing the renewable energy and decreasing greenhouse gas emission.

*2 Redox flow battery (RF Battery)
A RF battery system consists of cells for battery reaction, tanks for storing active material, pumps, and pipes for circulating the active material. In RF Battery, the output (kW) and capacity (kWh) parts are independent of each other, allowing for appropriate output power and energy capacity design according to application. The charging and discharging reaction cause a change only in the valence of the ions in electrolytes, which prevents degradation of the electrodes and the active material, making it suitable as a long-life large storage battery. In addition, because it can operate under normal temperatures and is composed of non-combustible or flame-retardant materials, the possibility of a fire with the batteries is extremely low. As the state of charge is monitored accurately, the batteries ensure maximum safety in system operations.
*3 Ancillary services
Technical and operational schemes to maintain power quality. They include power balance monitoring, operating grids, and voltage/frequency regulation. In the past, utility companies were in charge of ancillary services. But in recent years, some functions of ancillary services have been identified, monetized, and built into the markets.
*4 Already initiated with a local grid operator (independent system operator) in December 2018
Reference：NEDO news release, December 18, 2018 “

NEDO Extends Redox Flow Battery System Project to Conduct an Additional Demonstration of a Microgrid as a Solution to Power Outages in California”
*6 It is the first time in the U.S. and Japan that a microgrid has been operated on a commercial distribution network with the storage batteries as the main power source, bracing for a power outage.
Researched by Sumitomo Electric
*7 Stably shift from a grid-connected state to a microgrid
As an example of microgrid operation, the waveforms of the microgrid frequency and the output of the storage batteries (following the load) during microgrid operation with black start (starting the microgrid from a power outage, disconnected from the grid) are shown below. It was confirmed that the RF battery became a stand-alone power source and maintained a stable frequency by balancing supply and demand of the load in the microgrid.

*8 Availability rate
Operating rate during the CAISO operational trial period, excluding periods of the outages due to the problems other than the battery equipment.