The Operational Experience of Sendai Microgrid in the Aftermath of the Great East Japan Earthquake: A Case Study

The Sendai Microgrid was initially designed in 2004 as a test bed for a demonstration project of NEDO. After the study was completed in 2008, the microgrid system has continued in operation under the management of NTT Facilities, Inc.

On March 11, 2011, the devastating Great East Japan Earthquake hit the Tohoku district, inflicting catastrophic damage on the district's energy supply system for a number of days. Despite the extreme devastation, the Sendai Microgrid resumed supplying power and heat to customers after a short interruption, proving its effectiveness.

This case study is an analysis of the operations of the Sendai Microgrid in the aftermath of the earthquake and will provide useful lessons for all microgrid operators and users around the world.

For the period between FY2009 and FY2014, the Japan – U.S. Collaborative Smart Grid Demonstration Project in New Mexico was implemented at two sites, Los Alamos and Albuquerque in New Mexico State in the United States as NEDO’s first Overseas Smart Community Demonstration Project. The project was accomplished by a collaboration of 19 Japanese companies, the State Government of New Mexico, electric utilities, research organizations, and other stakeholders demonstrate technologies that allow for large scale penetration of renewable energy in the future, and offering some important clues on the promotion of smart grid in both Japan and the U.S. in the course of this demonstrative experiment.

This Document is a case study focusing on the efforts deployed in Los Alamos and Albuquerque and report on the suggestions made by this experience.

■Contribution to power system as a microgrid

■Coordinated operation with other control system

During the period between2012 and2015, there had been a Spain-Japan joint project for smart community demonstration in Malaga, Spain, focusing on road transportation system in a society with high EV penetration. As one of the NEDO Smart Community Overseas Demonstration Projects,ZEM2ALL was launched based on the technical development collaboration agreement “Japan-Spain Innovation Program (JSIP)”concluded between NEDO and the Center for the Development of Industrial Technology (CDTI), a Spanish public organization. Under the MOU signed between NEDO and Malaga City in 2012, a total of six private companies from Spain and Japan established a consortium (ZEM2ALL) and participated in the demonstration.

The project had important implications for the process of building smart community infrastructure and implementing EV power demand management, etc. which were designed for the further spread of EV. Not only the technical demonstration of smart city, customer relationship building was also conducted actively in collaboration with Malaga City. In this sense, the demonstration project had a huge social role as well. In this Case Study, lessons learnt from the demonstration on smart community related technology and the social significance of the project were summarized.

During the period between 2011 and 2016, there had been a smart community project called JUMPSmartMaui (JSM) held in the island of Maui, Hawaii, U.S. With the objective of effective utilization of renewable energy that had been penetrating on a larger scale and widespread deployment of electric vehicles (EVs), a smart community was constructed by Hawaiian and Japanese stakeholders. Smart community is a social system that integrates advanced environmental and energy technologies and provides citizens belonging to the community with sustainable, safe and secure society. In this context, it is important to have a perspective of what value had been provided to citizens by the smart community. Based on this viewpoint, this report summarizes suggestions for future smart community development derived from the activities and results of JUMPSmartMaui, especially from the engagement of citizens (i.e. volunteers participated in JUMPSmartMaui) on EV-related programs.

In Lyon, France, there was a smart community demonstration conducted as a joint project with Japan from 2011 to 2016, focusing on the construction of a future-oriented city where advanced energy technologies are utilized to achieve Europe’s aggressive environmental target. As one of NEDO International Smart Community Projects and part of Lyon Confluence district redevelopment project which Lyon Métropole had implemented based on commission to SPL Lyon Confluence, the project was jointly conducted by Toshiba of Japan and four major partner companies of France under the Implementation Agreement (IA), based on the Memorandum of Agreement (MoA) concluded between NEDO and Lyon Métropole.

The project was designed to demonstrate the introduction of energy saving technologies to new and existing houses, and the construction and evaluation of IT-based PV generation management system, EV car sharing system and the system supporting effective and efficient city planning through management of real time energy usage data of the city, bringing about some important implications.This Case Study summarizes the smart community technology related lessons learnt from the demonstration and the social meaning of the project.

■Overview of demonstration project in Lyon

■For further development of smart community

During the period between 2014 and 2016, there had been a smart community demonstration project held as a UK-Japan joint project in Manchester, U.K. The main objective was to confirm the validity and feasibility of an aggregation business that creates load adjustment power by controlling residential power consumption using Japanese ICT in the UK, which is an advanced country in terms of efforts including introduction of renewable energy to realize low-carbon societies.

Under a cooperation agreement to promote the demonstration concluded between the Greater Manchester Combined Authority (GMCA) and NEDO, the project was carried out jointly by local players including the UK housing corporation and universities and the Japan Consortium composed of NEDO, Hitachi, Daikin Industries and Mizuho Bank. The project included introduction of heat pump (HP) technology to insulated public housing, provision of demand response (DR) technology in consideration of residents' living environment and development of an aggregation system that responds to the electricity market in the UK followed by the verification of the effects, providing important suggestions during the process.

This case study summarizes the implications of smart community related technologies obtained from and the social significance of the demonstration. 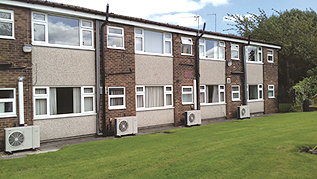